Welcome to my World!

Another Day of Travel

“Hey, it’s Karen. I’m traveling today. Going down to Florida. I’m in Detroit for the next two and a half hours so if you want to talk….”

I did not say that.

Yes, my name is Karen. I am traveling today. To Florida. And here I sit in Detroit (the airport—not downtown or Motown) for the next two hours. I just overheard previous phone conversation here in the Delta Sky Lounge. Am I surprised of the coincidence? Oh dear mercy no. And neither are you if you’ve followed any of my travel adventures via Facebook or Twitter, right? (And should I tell poor Other Karen that we leave here in TWO hours and not two and a half?) 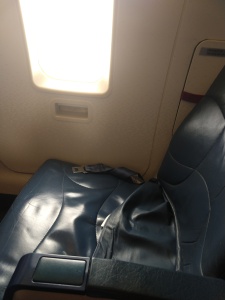 But, back on the plane, there was the guy (Now she’s leaving a message for Fred—“it’s been a LONG time since” they’ve talked and he has a birthday coming up) behind me who smelled like stale cigarettes. I asked if I should spray my carry on approved perfume towards him and you all answered, yes! Sadly, I got the votes after I landed and we all lost our opportunity to save the next passenger near him from gagging on Ashtray Airfreshener.

(O.K. is now leaving a message for Jill. She thinks they should get together on Marco Island. I’d like to go there too! Also, O.K. will be “in and out tomorrow” and she’s “going to do some shopping.”)

Back to the miracle of The Empty Seat. Here’s where, after years of being ridiculed, teased and bullied, starting the first day of First grade and ending, um, never, for being “short”, it was a great advantage to be tiny. 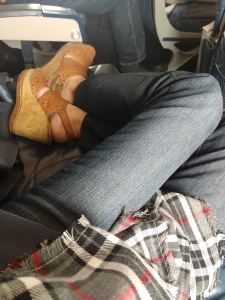 (O.K. just left another message.) I missed the name as I was suffering a brief moment of PSTD from Short Teasing. Do you think everyone Other Karen knows is screening their calls or they’re just off taking advantage of the clear roads to run Saturday errands?

(“And free booze. That’s about it….Nothing like Hawaii though.”) Um, Other Karen, you apparently didn’t follow my 25th Wedding Anniversary “Luxury” vacation in Hawaii. Remember that place, friends?!

Speaking of free booze, this Karen is going to get a Chardonnay…while hoping the next flight is finger nail clipping/ashtray smelling/manspreading/loud nonstop yakking/mucous coughing free!

But we know better, don’t we?

P.P.S. O.K. is four seating stations away from me. I, as you can tell, am hearing Every. Word. Of. Her. Phone. Calls. Yet right next to me is a gentleman on a phone call. I can barely make out a single word he’s saying.

Let’s be like that guy when we’re on our phone in public, okay?